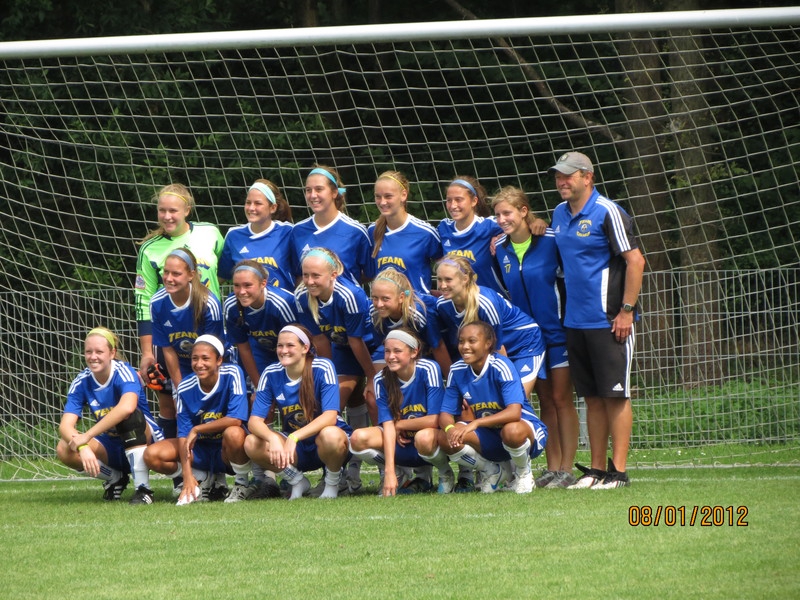 Today we were up at 9am for the breakfast inside the hotel. Then the head coach of Brondby’s professional women’s team, Peer Lisdorf, was nice enough to put together a practice for us.

We were all happy when we found out that the practice was only going to consist of technical ball work because of how tired we all were. Coach Peer put on a great practice that we all enjoyed and had fun at.

After the practice, we took a 30 minute walk to a quaint medieval town. Even though it was an excruciatingly long walk to the town, it was worth it to see the cool houses that were built 500 years ago. From there, we took a bus to a beach off the Baltic Sea. Some of us went swimming, while others dipped our feet in just to say that we had been in the Sea.

Once we were done hanging around at the beach we got cleaned up and ready to go to Tivoli. Tivoli is an amusement park with all sorts of roller coasters and carnival rides located in downtown Copenhagen. It was an amazing experience especially since Walt Disney got his idea for Disneyland from here. The rides were insane and some of the most fun experiences many of us have ever encountered. When the sun went down, the team was in awe when the whole park was lit up with beautiful lights. After a fun-filled night, we all went back to the hotel and went right to sleep.

Once again we got up at the crack of dawn, or so it seemed. We ate breakfast and then went to the bus stop and were off to Copenhagen.

We took multiple trains, and some of our teammates got stuck on one of the trains because they were not quick enough getting off. The rest of the group had to wait for them while they took a short detour.

Once we got downtown we took a fascinating boat tour of the lovely Copenhagen. There was awesome architecture and even a huge sand castle building contest. After the tour we shopped till we dropped. A popular item to buy was the fashionable and functional fanny-pack.

After shopping all day long, we were quite tired and went back to the hotel. A few Danish girls came over, and we spent the rest of our night relaxing.

They were our hardest competition by far, but in the end we came out victorious with a 4-2 win. The game was tied 2-2 until about 15 minutes left when we had two consecutive goals scored within a 60-second window. The final whistle blew and we were champions.

We then headed back to our rooms to shower and get ready for the barbecue that Brondby was hosting for us. After a nice full meal we walked to Freja’s house to hang out with the Danish team and some of their friends.

Finally we headed back to the hotel for a good night’s rest before our day out sightseeing and shopping in Copenhagen. 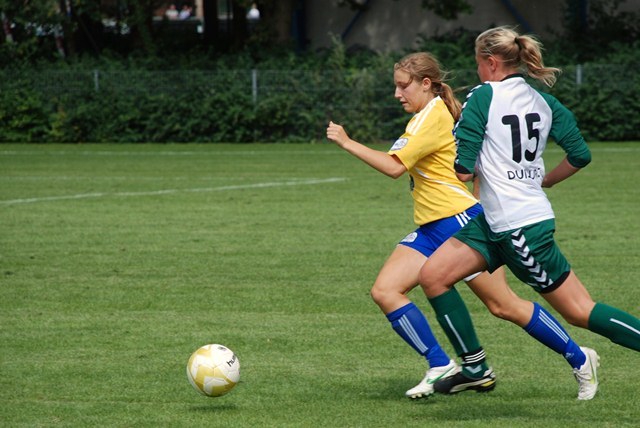 Today we woke up for an 8:30 breakfast again. It has been pretty difficult adjusting to the 7 hour time difference. However, we’re hoping by napping less in the day and falling asleep earlier in the night, our bodies will start getting use to it.

Our first game was at 11:30am against a German team – Duisburg. The refs weren’t able to keep the physical part of the game under control, which led to some heated situations. But, despite of all that we pulled away with a 4-0 win.

We had about a 5 hour time window to get some lunch before our second game. So instead of going to the cafeteria for lunch, we walked to a strip mall where we had a couple different food choices. Most of us either had pizza or hamburgers/hotdogs. After lunch, we went to this little bakery to get some goodies to munch on for the walk back to the hotel. One of the hot items that many of the girls bought were the tasty cinnamon rolls.

After the long walk back to the hotel we had a little time to rest and then we were off for game 3 of the Brøndby Cup. We played another Danish team – GS Elite. After playing 80 minutes earlier that day, we were pretty exhausted. Although, we were able to come out with a 6-1 win.

As soon as the game was over, we went to the clubhouse right next to the fields where Phil treated us to dinner. We ate and headed back to the hotel to take a quick shower and go to sleep.

The outcome of our past three games in the tournament landed us in the finals the next morning where we would face the Brondby IF team we lost to 2-1 during out first game. Therefore, we went to bed eager for some revenge and excited for the chance to win an international championship. 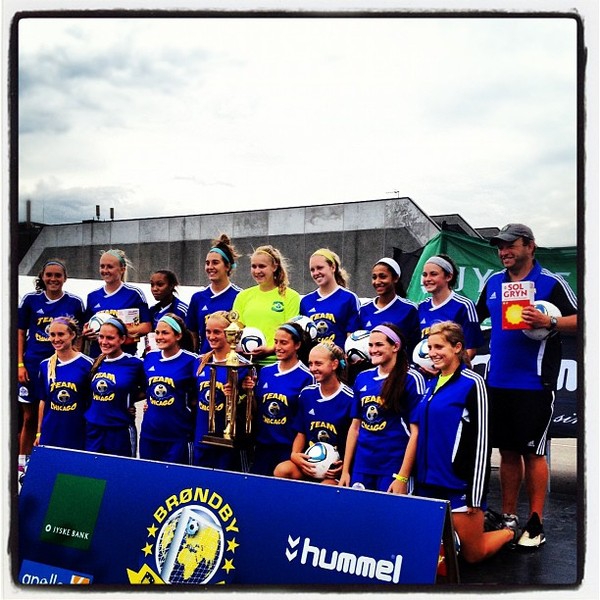 Team Chicago Academy-Botafogo claimed the Brondby Cup title with an exhilarating 4-2 defeat of the host Brondby IF. Brondby – the defending Danish U18 champions had defeated Botafogo 2-1 two days ago, but in the final Botafogo wasn’t to be denied.

Playing on some very tired legs after a long and grueling summer (and 4 games in 44 hours), the Botafogo girls got off to a great start in the final when Zoe Swift scored in the 8th minute. Center-back Rachele Armand played a wonderful ball over the top that found a perfect 60-yard run by left-back Kaitlin Johnson who played in a great left-footed cross to Zoe Swift inside the 6-yard box.

After that great start, the tired legs started to show and Brondby dominated most of the rest of the first half. They managed to score two goals to take a 2-1 lead into the half-time.

However, switching from a 4-3-3 formation to a 4-5-1 formation from the start of the second half it was an inspired Botafogo team that immediately took control of the midfield. With that control the defenders got more time on the ball, and they started play-making and keeping better possession. The extra players in the midfield also allowed more penetrating runs from deep, and pretty soon Botafogo had established total dominance.

Ashley Handwork, playing as the lone striker, did a yeoman’s job up top, and about 15 minutes in her tenacious work won Botafogo a penalty which Meegan Johnston expertly converted to tie the game. Boosted by the goal Botafogo created chance after chance, and especially Kaitlin’s Johnson’s penetrating run from the left-back position onto a perfect Dana Miller through-ball had deserved a better end-result.

But the Botafogo parents, and Coach Phil Nielsen’s family, who were cheering the team on from the sideline had to wait until the 83rd minute before they saw the eventual game-winning goal. Another tenacious bit of pressuring by Ashley Handwork lead to a too-soft pass-back by the Brondby center-back, which Zoe Swift intercepted before calmly rounding the keeper and slotting it home with her 7th goal in 4 games.

And the fans got even more to cheer about less than 60 seconds later when Darby Moran hit a perfect shot from the distance to put the game away. It was a great goal to perfectly complete a fantastic performance at the end of an incredible summer of soccer for Botafogo.