Team Chicago Academy-Santos and Botafogo both advanced to the Disney Showcase Championship Games. Botafogo will face Davis Legacy from California at 7:30am Central Time in a game shown on ESPN3. Santos will face Cup Crew from Ohio at noon Central Time.

They are among the 40 best female youth soccer players in the country, and only 2 other Illinois players received this honor. Zoey Goralski plays her prep soccer for Team Chicago Academy-Brasilia Head Coach Joe Moreau at Neuqua Valley H.S. and Zoe Swift preps at Naperville North H.S.

The honorees will be celebrated at a banquet at the NSCAA Convention in Kansas City, MO January 11-15th.

Here is the link to the NSCAA press-release http://www.nscaa.com/news/2011/12/2011-girls-youth-all-america-team

Barcelona v. the Best? No Contest

Within the last eight days Barcelona has stamped its superiority on world soccer in a way that brooks no argument. Pep Guardiola’s team is simply irresistible.

Just over a week ago, Barcelona took on Real Madrid — in the Bernabeu. A formidable challenge for any team. Not many teams win there, and this moment suggested that Barca was in for a rude awakening, for Real — 15 consecutive wins — was tearing up La Liga, with the wonderful Cristiano Ronaldo in majestic form, scoring goal after splendid goal.

Yet Barca made short work of Real. Despite that disastrous start to the game, when goalkeeper Victor Valdes virtually gifted a goal to Real. The game was only 22 seconds old when Karim Benzema pounced on Valdes’s error to put Real 1-0 ahead.

Barca’s reaction to this stunning opening was equally stunning. Because there was, in effect, no reaction. Barca would simply play the way it always plays — and, of especial significance, goalkeeper Valdes would persist with the very approach that had landed him and his team in trouble – he would continue to try to pass the ball out to a teammate, rather than hoof it downfield.

Worse yet for Real was that the humiliation — for that’s what it was — was administered by a Barca team that was never puffing and panting and straining to achieve victory. The Barca players played their game, the game we’ve been watching for some years now — watching it but never tiring of watching it.

Once again we could see Barca dominating a game with ball possession and quick-fire, accurate passing, with players moving smoothly and quickly in magical patterns, or maybe not patterns, maybe just inspired traceries of improvisation … but movement with an aura of purpose. And of beauty.

It is no easy thing to make a soccer ball — a small, ordinary little sphere — come alive as a joyful plaything, the obedient focus of the sparkling skills of Barca’s players.

So, yes, Barca does make it look easy. It has developed a style that is faithful to the truths of soccer: It is not hard to identify those truths — that the sport is about players with superior skill on the ball, and that it is a sport that should be played with the ball on the ground. Those two essentials take us a long way toward understanding why Barca plays and looks the way it does.

Having so completely outclassed Real Madrid, Barca then traveled halfway around the world to take on South American champion Santos in Japan. Another wipeout. That 4-0 scoreline could have been 6-0 or maybe even 8-0. There were periods of this game when Santos — by no means a poor team — simply could not get any possession of the ball at all.

Even more so than in the Real Madrid game, this was Barca playing with smooth, easy assurance, totally in command. Poor Santos. Yes, poor Santos — because, having watched Barca humiliate two of the world’s top teams while barely raising a sweat, you begin to entertain the notion that this sort of superiority is somehow not fair.

An idea that has occurred to all of Barca’s opponents, of course. Their response is to play with a massive emphasis on defense, hoping to pull off — as Getafe did last month — an upset 1-0 win. Real felt that it was good enough to beat Barca and didn’t need to play negatively in front of its own fans, while Santos is from South America where tactics have less of a hold on the imagination of the fans.

Both Real and Santos paid heavily for their presumption. Whereas Getafe was rewarded for what amounts to cowardice. At the moment it seems that there simply is not another team on this planet that can hope to beat Barcelona by playing attacking soccer.

So, is that an unfair situation? Hardly. There is nothing to stop other teams from adopting the Barca approach to the sport … but how many do? Very, very few — with most coaches regarding Barca’s brilliance as something beyond the reach of other teams. So the tactical response, even the physical response, is what we get.

We saw that, at its worst, not with Barcelona but with the closely related style of Spain during the 2010 World Cup (when the Spanish team was dominated by Barca players). Of Spain’s seven opponents, only Chile came to play. After losing 1-0 to a craven Switzerland, Spain had to grind out a series of far-from-entertaining 1-0 wins.

And that very definitely is a problem — when the sport is blessed with one of the most brilliant teams it has seen for years and the sport itself responds by reducing its games to grim defensive struggles or — as in the 2010 final — to downright ugly, physical, foul-plagued contests.

Obviously, Barca cannot be blamed for being good. But there is a real sense in which the opponents who want to beat it (or at least to survive against Barca) cannot be blamed either. For they are always going to adopt whatever style or tactics offer the most hope of staying in the game. If that means playing negatively, then the blame lies squarely with the game itself.

The rules of soccer should be so framed as to make it unlikely, if not downright impossible, for a team to play utterly negative soccer and yet emerge triumphant. This has been a problem for the sport for some time now — anyone who might have claimed that such a problem did not exist must surely have been disabused by the awful Greek team that won the European Championship in 2004 by scoring just seven times in six games.

The rules of the sport do get a yearly revision, and it’s worth studying the changes that are made — something that I shall do next time, taking a look at the revised rules that came into force this fall. 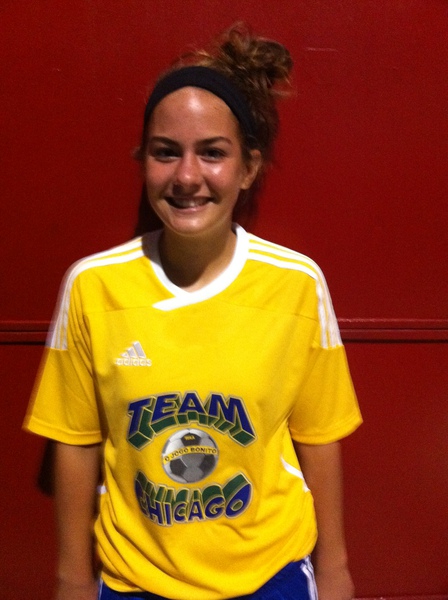 Jorie Clawson, a defender on Team Chicago Academy-Botafogo, has accepted a great scholarship to continue her soccer career at Southern Illinois University-Edwardsville. Jorie, who plays her prep soccer at St. Charles North H.S., will be part of Head Coach Derek Burton’s 2013 recruiting class.

SIUE competes in the Ohio Valley Conference of NCAA Division I, and finished the 2011 season tied for 6th with Eastern Illinois University. 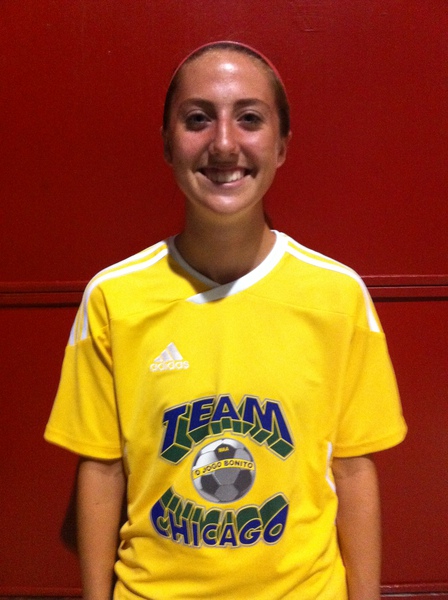 Zoey is one of only three Illinois players to receive this prestigious honor this year, joining her former Neuqua team Megan Oyster (who now plies her trade at UCLA) and Carly Stevens from Loyola Academy (now at Loyola University).

The NSCAA is the world’s largest coaches’ assocition, and the All-America honorees will be recognized at a banquet at the NSCAA Convention in Kansas City, MO January 11-15th, 2012