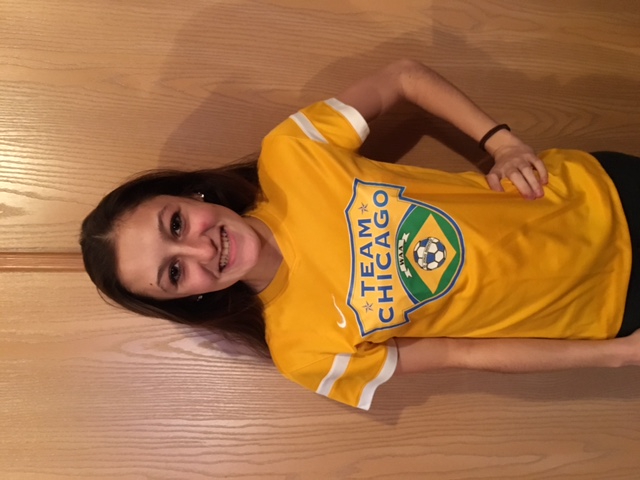 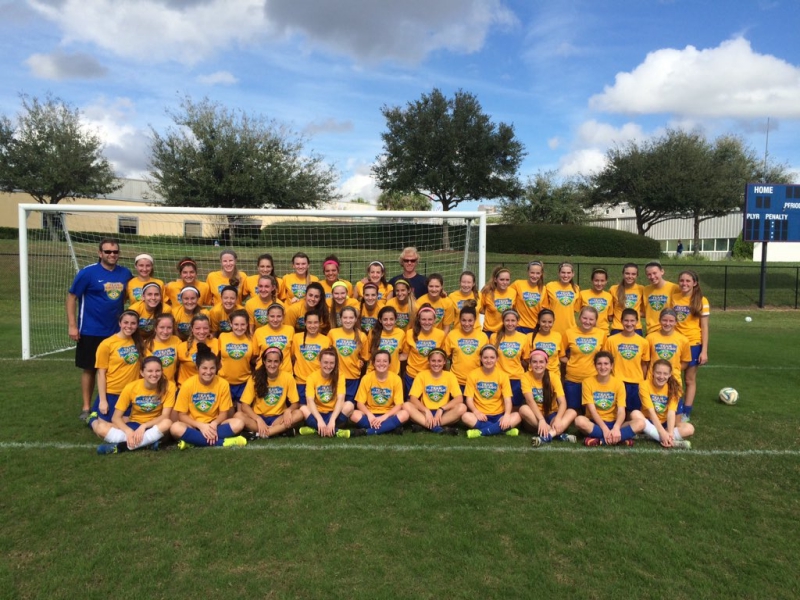 Team Chicago Academy-Brasilia, Cruzeiro, and Bahia are currently in Orlando, FL participating in the premier college showcase at ESPN Wide World of Sports.

The 54 players and 2 coaches faced a bit of logistical nightmare as a number of the flights to Orlando got canceled on Monday and Tuesday. But 4 parents and the 2 coaches rented minivans and drove through the night to make sure all the players arrived in time for the important event.

For the past 2 days the teams have stayed and trained at the National Training Center in Clermont, FL. Team Chicago founder and President Emeritus – Hudson Fortune – was there to help work with the girls on finishing and technical work.

The opening games are tomorrow and here is what is facing the teams:

Brasilia is in 2nd place in the National League after the 4 games played in Wilson, NC earlier this month (please see write-up below). With 3 wins here at Disney the team will be secured a spot at the USYS National Championships next summer. 2 wins and a tie would probably be enough, too.

In its opening game in Wilson Brasilia faced Beadling from Pennsylvania. After being under pressure in the early stages, Brasilia went behind on a Beadling goal from the edge of the area. Showing great resolve, Brasilia dug in and eventually found the equalizer through a Sarah Griffith goal. Despite several other chances the game ended in 1-1 tie. Nicole Mondi, Ashley Santos and Jasmine Ruiz led Brasilia with outstanding performances.

In its second game Brasilia faced Kings Hammer Academy. On a goal from distance by Ashley Santos before halftime Brasilia took all three points with a 1-0 victory to leave them in second place in the group. Madison Lockard got the shutout in goal, with Makenna Schoolman, Nicole Mondi, Holly Collingbourne and Rachel Erdman helping shut down the Kings Hammer attack.

In game three Brasilia faced off against perennial powerhouse club Legends FC from Southern California. An evenly balanced game saw Legends take the lead before the halftime break on a goal from a corner kick. Brasilia continued to battle and evened the score on a goal from Sarah Griffith from a Jasmine Ruiz free kick. The game ended in a 1-1 tie that left Brasilia undefeated after three matches.

The fourth and final game of the weekend kicked off at 7:30am vs Utah club La Roca. Battling through tough field conditions Brasilia allowed only one shot on goal in the first half before turning the screw in the second half and creating several quality scoring chances. In the first minute of injury time Ashley Santos worked her way into the box for a shot, and Sarah Griffith was there to poke home the rebound as Brasilia took all three points. Another shutout for Madison Lockard, and a stifling defensive performance again from Schoolman, Mondi, Lupe Anguiano and Rachel Erdman, and great effort from everyone shut down the La Roca attack.

Cruzeiro will be facing Florida Elite tomorrow, East Islip (NY) Friday, and Pickering Power (Canada) for a spot in the Disney Showcase final on Sunday.

This is Cruzeiro’s second major college showcase this winter. At the beginning of the month, Cruzeiro traveled to Raleigh, NC for the CASL Showcase. An unfortunate 1-0 loss in the opening game against East Meadow (NY) was quickly corrected with two strong wins against Rio Rapids (NM) 2-1 and OPSA (MD) 3-1 to finish on top of the group. Sydney Rushing and Niamh Hehir got the late goals to beat Rio Rapids, and Riley O’Brien, Sydney Rushing, and Francesca Marconi got the goals in the win against OPSA.

The Disney Showcase marks Bahia’s first participation in a major college showcase. Bahia will be facing Colorado Rush tomorrow, FC Alliance (TN) Friday, and FC Westchester (NY) on Saturday for a spot in the Disney Showcase final on Sunday.

You Are Responsible For Your Soccer Improvement. Don’t Blame Anyone Else.

I tell all my players one specific thing when I start working with me. And it doesn’t matter if this player is engaged in a Champions League campaign or is just trying to make his or her way up the College ladder. The truth is the same, no matter the level a player competes at.

The message I give them is one of the most important you can ever hear. You must take it to heart. You must tattoo it on your brain. You must wear it on your sleeve. It’s this:

Maybe when you read this it sounds obvious. Maybe it sounds difficult. Maybe you disagree (if you do then go take up another hobby or profession – you won’t get far!) Maybe you’re underwhelmed. You don’t see the big deal. But there is a big deal.

In my 15 years working in British and European soccer I have come across countless ‘talented’ young players who don’t adhere to the principle of taking responsibility. These young players play the blame game. It’s their teammates fault. It’s the coach. It’s mom and dad. They become excuse laden.

I’ve worked with top players who, at first, have shied away from challenges. They haven’t taken responsibility. When they’ve been dropped they’ve said to me that the coach doesn’t understand. That they should be on the team. That it’s not fair. These players tend to demand that their agent find them a new club. What they don’t get is that they’ll find the same problem at another club – it’s inevitable.

When a top player doesn’t take responsibility, they face an ultimatum from me. Sure we’ll talk about it. Sure, I’ll empathise a little. But ultimately we have to agree that the player will take responsibility or I won’t work with him or her — and trust me, I’ve said this to some pretty big names in professional soccer.

Now, let me tell you something you need to know. It’s always you. You get to choose how to react and respond to 99% of challenging situations that happen in soccer.

If you feel your coach is being unfair, then deal with it. And deal with it quick. Here is a recommendation – Listen to what he or she has to say and strive to look at the world through his or her eyes. Coaches try to help. Sure, there may be some misguided coaches out there (I’m sure none are reading this article) but that’s life. Get the most out of their advice by striving to understand where they’re coming from.

If a coach wants you to play in an unfamiliar position and every part of your body wants to scream “But I don’t know how” and “I should be playing in my favoured position” then STOP. Use the coaches decision as an opportunity to learn. The unfamiliar task will give you the opportunity to sharpen your skills.

For example, if you’re a striker and you’ve been asked to play as a centre midfielder, a helpful suggested reaction would be to say “Fantastic, I get a chance to improve my game. I get a chance to see what a midfielder sees. I get to learn more about being a striker by looking at the position from a midfielder’s point of view. I also get to challenge my tackling ability, my positional awareness, my fitness and my passing.”

In my first soccer book, Soccer Tough, I wrote about the Messi Mindset. It introduced the reader to the incredible mindset of Lionel Messi. Sure, we all know the diminutive Argentinian has some serious skill in his feet. But he’s also mentally very tough. And he takes responsibility. As a kid, growing up at the Barcelona Academy he wasn’t always top dog. With his height and stature he had to be patient. He would be dropped and played down a year. At fourteen he wasn’t the best in his age group. But he took responsibility. He accepted playing on the B team. He accepted playing for a different year group.

If you come across a particular problem like being dropped, or having a series of bad games, or missing out on an important trial… then relax. Take the emotion out of the situation and strive to see things logically. Being dropped is merely feedback for you to get better. So go get better. Missing out on a trial means that you have to improve something with your game – so go find out what and go improve that thing.

Champions are champions because they take responsibility. They yearn for success but understand that it is down to them to find that success. They know there will be roadblocks and speedbumps on their journey – but they find ways to work around them and work over them. That’s why they are champions.

So my message to you as a soccer player is simple and succinct:

You are responsible for your soccer improvement every single day. Don’t blame anyone else. Don’t moan or groan. Just take 100% responsibility yourself.* 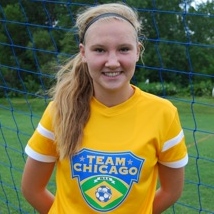 The US Youth Soccer Girls Inter-Regional ODP event in Boca Raton, Florida was a huge success for the five Team Chicago players participating.

In the 2000 age group Alyssa Bombacino and Bailee Witt represented Region II in style. Alyssa was one of two Region II players named to the All-Star Team for her contributions in the midfield, and Bailee was stellar in goal.

In the 2001 age group Natalie Massa helped anchor a back-line that only conceded 1 goal in 3 convincing wins to claim the Inter-Regional title.

In the 2002 age group Katelyn Nardulli and Tara Tesmond helped anchor a defense that only conceded 1 goal in 3 games on the way to the Inter-Regional title. The 2002 Region II team was head coached by Phil Nielsen. 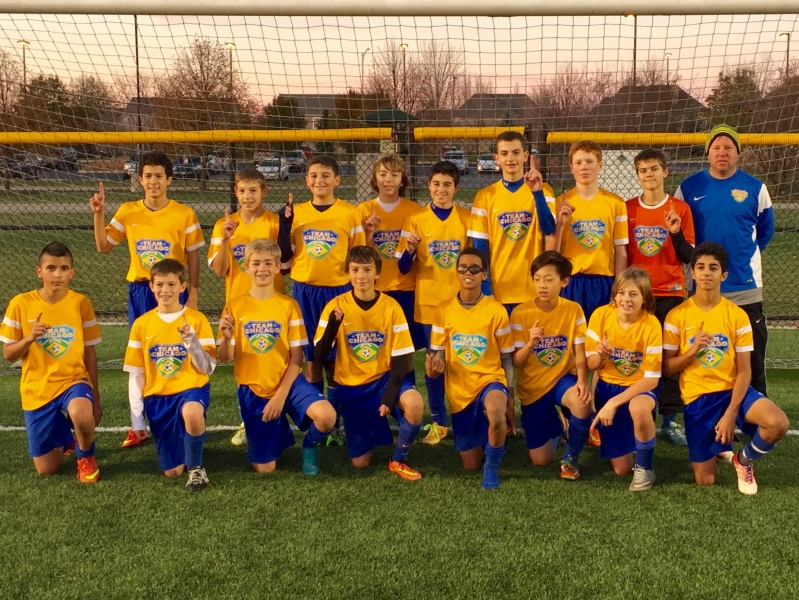 Team Chicago Academy Boa captured the league crown Saturday by beating Wisla in the final game of the season. This is the second time Boa beat Wisla this campaign. This marks tremendous improvement for Boa as Wisla defeated Boa twice last season and won the league. Now the tables have turned and we are very proud of Boa!

Matthew Dovalovsky scored the game winning goal in the first five minutes. That goal eventually held the result. Jason Baker made some brilliant saves to keep the clean sheet in goal.

Congrats to Boa on winning the league title!